This year we sent 3 of our reps – Sarah (Membership Officer and SR Steward), Jacqueline (Branch Treasurer, Black Members Rep and TAP Steward), plus Dan (Communications Officer and LGBT+ Rep) to NDC. This is a brief snapshot of the conference from Dan.

Dan’s conference highlight
One of the key motions we debated was adding the ‘+’ to the current LGBT acronym for our LGBT members. Although the LGBT SOG works with inclusive, umbrella definitions it’s clear that some members who the LGBT group consider to be part of the group are put off. Some of the LGBT members don’t use the label about themselves, for example people who identify as queer or pansexual. It was also an issue with our LGBT Black members who didn’t use Western terms to identify their sexuality and/or gender identity such as the term two spirit used amongst Native communities.

The National LGBT Committee, therefore, submitted a motion to 2018 LGBT Conference proposing that the group agree that its name should be changed and that a rule amendment should be submitted to 2019 National Delegate Conference to seek approval to change the name of the LGBT group to the LGBT+ group. LGBT Conference agreed on this motion and then at the NDC it was unanimously agreed to adopt the new name of ‘LGBT+’.

Ideas from NDC
A few of the motions gave me some ideas on what we can do within our own branch, these are the ideas I had and as a committee, we will decide on which ones we can take forward:

The full guide to the motions debated and the decisions made can be found at https://www.unison.org.uk/content/uploads/2019/07/2019-National-Delegate-Conference_Decisions_Booklet_Final.docx 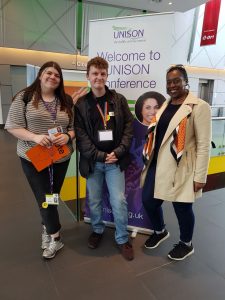